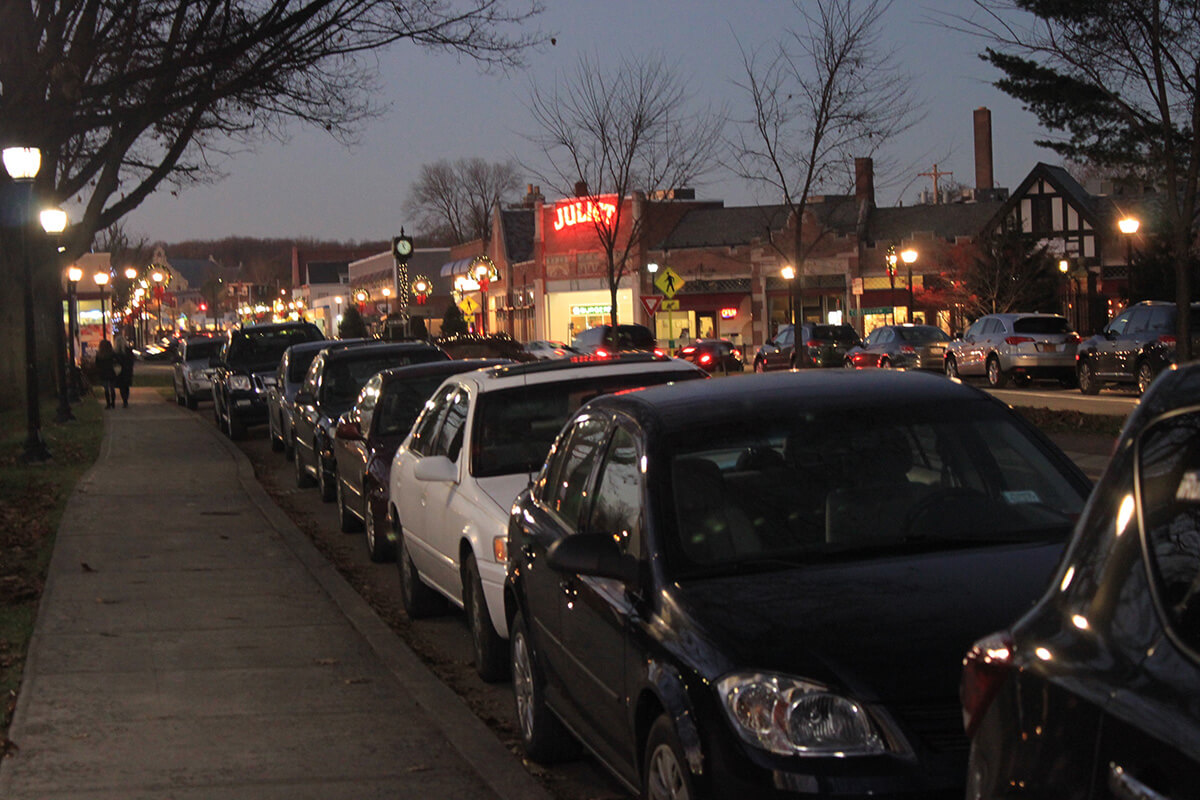 In the 1960s, the New York State Department of Transportation (NYSDOT) converted a 1.5-mile (2.4-kilometer) section of Route 376/Raymond Avenue into a concrete, four-lane arterial. Serving Poughkeepsie’s downtown Arlington District, which includes residences, businesses, and Vassar College, the roadway had eight signalized intersections and intermittent parking lanes (not continuous through the corridor) and sidewalks.

In time, high traffic volume began to take a toll on the concrete pavement of Raymond Avenue. The surface lost much of its friction, making it more slippery and conducive to crashes. Other safety problems included a lack of turning lanes at the intersections, combined with significant turning volumes, which caused drivers to weave through traffic to avoid turning vehicles and increased the likelihood of crashes. The corridor also posed dangers to pedestrians. The sidewalks were not continuous, and crosswalks were located only at the signalized intersections, which were far apart. Many pedestrians crossed four lanes of traffic outside the protected crosswalks.

NYSDOT’s goals for the reconstruction were to improve Arlington by providing a traditional “Main Street” with vehicle, bicycle, and pedestrian features, all operating together safely. The project would reduce vehicle travel delays and improve pedestrian access from Vassar and nearby homes to the downtown business district. NYSDOT would employ context sensitive design and involve all stakeholders to ensure the project was in harmony with the community and its scenic, aesthetic, and historic resources.

The agency’s first order of business was to replace three signalized intersections with roundabouts, which generally are safer than conventional intersections. The roundabouts increased traffic movement through the corridor with fewer interruptions, but still at safe speeds. Because they handle traffic more efficiently, roundabouts reduce energy consumption and improve air quality. The placement of the roundabouts also increased the overall width of the sidewalks, enabling local businesses to provide more gathering spaces and outdoor dining.

In addition, NYSDOT put Raymond Avenue on a “road diet,” reducing the travel lanes from four to two. The previous design encouraged vehicle speeds that neared 50 miles per hour, mi/h (80.5 kilometers per hour, km/h). Students and faculty at Vassar and an elementary school found the area difficult and dangerous to navigate, and business owners wanted to attract more foot traffic.

The thinner road helped reduce vehicle speeds and increase pedestrian safety. NYSDOT dedicated the old, outer lanes to parking to handle business traffic. Cobblestone imprint strips better delineate the parking lanes adjacent to the roadway and encourage vehicles to park closer to the curb, which creates more space for bicycles to share the street. The diet also had the effect of bringing back Raymond Avenue’s original historical context.

NYSDOT installed raised medians to delineate traffic lanes and for pedestrian refuge in crossing zones. Some medians contain traversable curbing for emergency vehicles to access. The agency planted other medians with trees to enhance the visual appeal along the corridor and reduce the urban heat island effect.

A traffic operations study, performed after construction of two of three roundabouts, found the improvements are working. For instance, average vehicle speeds decreased by 9 mi/h (14.5 km/h) in each direction, approach delay at the roundabout intersections decreased by 56 percent, and total number of crashes decreased by 51 percent. However, backups at the remaining signalized intersection that was later replaced by the third roundabout, caused travel time through the corridor to increase by 7 percent during peak traffic.“NYSDOT could have just resurfaced the road but instead chose to create a community for living,” says Daniel Baah, PE, a principal project manager at CH2M HILL and one of the awards judges.